Includes realtime and high resolution models, rigged and animated with a run cycle. Can be used in games with a base model comprising of 2,800 polygons.

Primarily quadrangular, subdividable model that wraps to a millions plus high resolution sculpt, ideal for detailed close-ups and cinematic realism.

This zebra consists of realtime and high-resolution models. rigged and animated with a run cycle. The realtime model can be used in games and is made up of about 2800 polygons.

FBX and OBJ files are also included and can be used in other 3D applications such as game engines.

The UV’s are unwrapped non-overlapping and with seams primarily in occluded areas. UV islands maximize on 0 to 1 UV texture space. The model’s edge loops are placed with particular consideration for deformation during animation and the model subdivides perfectly. This product includes ultra high res sculpt data as well as a realtime 3D model. As a result, a varying Level Of Detail (LOD) can also be used for the model during rendering, which includes multiple 4K textures and a complex Physically Biased Rendering (PBR) node network with Fresnel, Sub-Surface Scattering (SSS), Specularity, Transparency, Hair, Normals of which all properties are very editable and non-destructive.
A loopable run-cycle is also included with a Soft Body (SB) vertex group that can be used for simulating dynamic secondary animation.

Rigged and animated zeba, with an active modifier stack that’s ready to render with hair for Cycles.

Textures are included in 4K and packed into the .blend 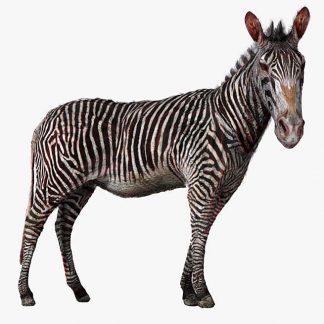