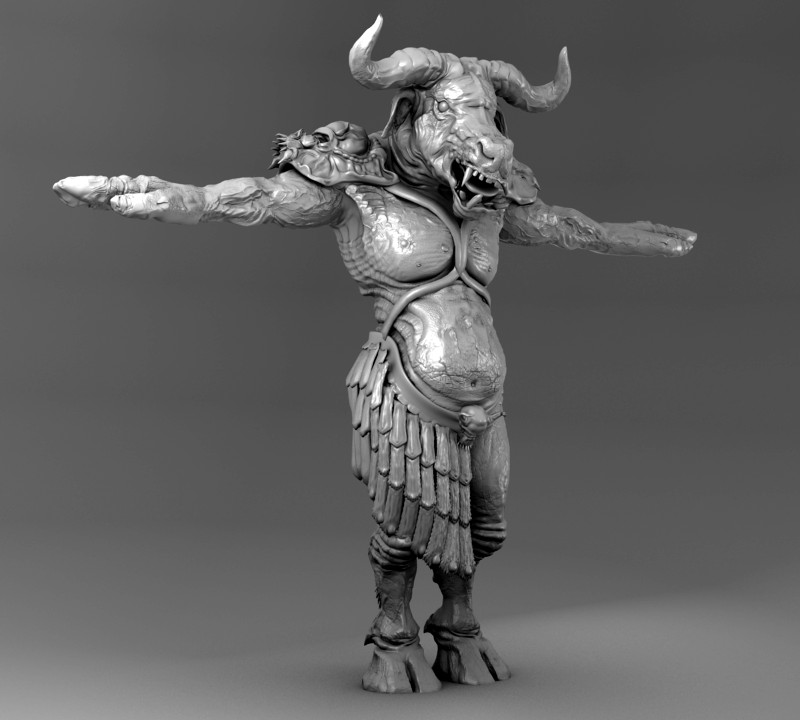 This image is of the highest level multi-res sculpt which, at level 5, is about 1,4 million polys for this model. Since this is just a test render mainly to see what the character currently looks like when wearing the armour, the armour is rendered at a low resolution. The Minotaur’s lower-body draping-clothing goes up to level 7, it is rendered here at level 4 in the front to level 1 at the back. The depth of field effect that this creates is merely coincidental and no post production is done on this image (as it is for testing purposes only).
The Minotaur sculpt data is about 95% complete in this picture, and attention needs to be directed towards the hands, mouth area (where removal of symmetry has begun). The final stage of the the Minotaur’s sculpt can only be completed when the armour sits flush against the characters skin, which would subsequently cause indentations in the flesh and possible abrasions. The highest level sculpt is not created with symmetry, but in order to emphasize the effect lower level sculpts often need to be readdressed so as not to create the impression of the highest level data looking like it’s been painted on the model, but is more solidly integrated into the characters anatomy.