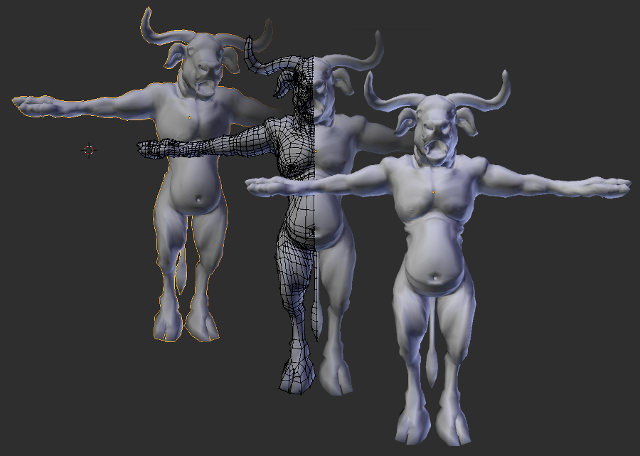 The arms and shoulder area have been in need of some major form adjustments, for example the shoulders are in a position that relates more to the arms being at 45 degree rotations rather than the current almost perpendicular (to the torso) position.

This sort of thing is often a side effect of using a selection with a fall-off also known as a soft selection.

The Black Arrow indicates the first adjustment, the arms are attached too low at the shoulders and need to
be raised.
The Teal Arrow indicates the area that adjustment should not exceed. In other words the area from the elbows down are currently parallel to the ground plane. Although this is not exactly a natural position, it will provide the best position for setting-up the hand’s rig (including the fingers). However it is not necessarily a “better” rest pose than having the characters arms at 45 degrees to the torso. One of the reasons why you might choose to use the latter as a rest pose is because with the arms lowered, in a more relaxed position there will be less deformation in the shoulder area.
The Red Arrow indicates the direction for a more natural flow of edge loops to make up the topology of the pectorals joining the shoulder area. As you can see the current geometry does not flow in the direction of the arrow and forms too much of a concave join.

Although the problem could have been fixed by making a selection from the tips of the fingers to the elbow and using a fall-off that extended into the shoulders, I chose instead to use a hard selection due to the side-effect of the soft-selection raising the geometry of the pectorals and torso.

In the above image the arms have been raised to the correct level, the hands are still parallel to the ground plane and the concave area between the pectorals and deltoid (shoulder)has been removed. You might also notice that the shoulders have an exaggerated deformation that emphasize the collar bone, but will be toned down once the pectorals represent a more completed form. With the main problem being that the majority of their surface area is facing sideways instead of towards the front. Pulling the sternum of the chest out from a side viewport with a soft selection will often have this side-effect.

The above image shows the shoulder deformation toned down and the majority of the pectoral’s surface area facing forward.
Happy with the results. I move onto the shin and wrists. The main concern is that more volume is needed in both areas.