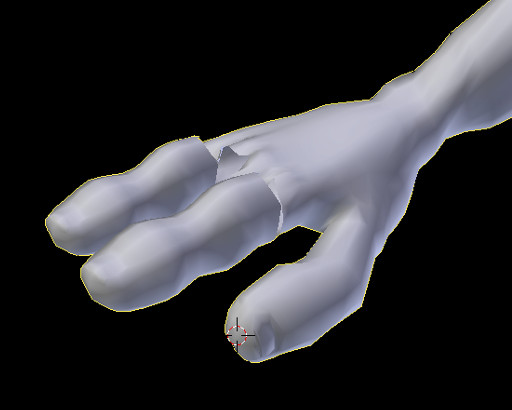 The hands of the current Minotaur model inherently have five fingers as they originate from the makeHuman base male model.

However my Minotaur only requires having two main fingers (being part bovine) and a thumb (for the added advantage of being able to hold something such as a weapon). There were two choices that I considered when constructing the fingers.

In an effort to retain the integrity of the models original edge loops, I decided to combine the index with middle finger and ring with pinky finger.

The technique was actually pretty simple, which would involve deleting the interior faces forming the adjacent regions between the two finger pairs.

The merge went along pretty smoothly

As you can see the underside of the fingers stemming from the palm area yielded a relatively workable first attempt and if I’d continued to work with this technique the result would have probably turned out to be equally as effective as option 2.

At some point during the combining process I came to the conclusion that it was taking far too much time to correct the geometry on a single finger a process that would have to be repeated on the next finger pair. The combine process left an excess of detail geometry in the palm and not enough in the fingers, which meant that when the surface is subdivided for sculpting I would have had more geometry in the palm than was necessary and not enough in the fingers.

Of course, I could have rectified this by treating the palm as an extension of the fingers and deleting the corresponding rows of palm geometry connected to the deleted finger geometry. This is possible because the edge loops comprising the makeHuman base model are surprisingly well established, as the top of the palm’s extra geometry that is needed to create the fingers originates from the wrist being split into trapezoids which splits a single row of faces into three rows (retaining quadrangles).

This extra amount of detail is particularly necessary to shape the nails of the fingers. The underside of the hand does not require as much detail and employs a different approach that lends itself efficiently to the topology that is required for effective deformation of the palm folding in on itself.

For example, when the thumb raises to touch the pinky finger and usually more importantly (as it tends to be more noticeable in animation) when the hand bends almost perpendicularly about the wrist so that the top of the hand forms an obtuse angle between itself and the wrist and the palm forms an almost acute angle (depending on how double jointed you are) with the underside of the wrist.

The geometry comprising the underside of the hand (including the palm) uses a technique more akin to the “C-shape” technique I used to reduce geometry in the neck area. This is evident when you notice that the topology of the underside of the base mesh’s hand forms a C-shape (see above image). It is these factors that lead me to believe that the combine method would have produced more accurate topology that is more inline with that of the original model’s and potentially alleviating some extensive pushing and pulling of vertices or having to retopologize the base Minotaur model. However, since it meant having to treat the fingers and palm, then reshape them both I decided to go for option 2 the duplicate method which is probably not as accurate in terms of retaining the original edge loops but is certainly much faster to reproduce. Dealing with topology will then be deferred to after the major form issues are addressed.
So having completed a single finger using the combine method, I scrapped the current model and reverted to an old save. I selected a single finger duplicated it, removed it from the model and modified it to have an enlarged nail that resembled something more of a partial hoof.
I then duplicated this finger, scaled it and modified it slightly. I then deleted all the base models fingers and reattached the new fingers, which were already form finished.

I was done in a couple of hours, with only the thumb pending to bring the hand to completion. The edge loops are not as perfect as they would have been with the combine process but I managed to tuck the anomalies between the fingers, an area that will not be visible for the shot I have planned for this model.

It’s really important to find this sort of balance in your own projects, such that you are allocating realistic timeframes to the allocated tasks, and not to be too idealistic in trying to attain perfection. Particularly, when the results of your somewhat extraneous efforts will never be evident.